You are here: Home › NASA › Image of the day › Hubble Finds Medusa in the Sky 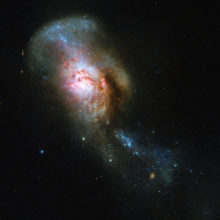 The Medusa merger, was not always one entity, but two. An early galaxy consumed a smaller gas-rich system, throwing out streams of stars and dust into space. These streams resemble the writhing snakes that Medusa, a monster in ancient Greek mythology, famously had on her head in place of hair, lending the object its intriguing name.