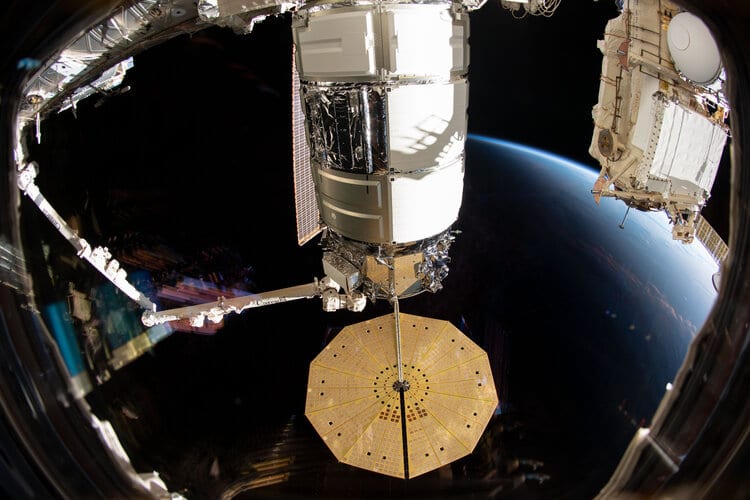 The Cygnus NG-12 cargo vehicle hangs out after arriving to the International Space Station on 4 November.

The latest resupply mission includes over 4 tonnes of science experiments, crew supplies, and station hardware. It also crucially includes components essential for the series of spacewalks taking place this month.

In a few weeks ESA astronaut Luca Parmitano and NASA astronaut Drew Morgan will venture out to perform a series of spacewalks four years in the making. The extravehicular activities, or EVAs, will service and enhance the dark matter-hunting Alpha Magnetic Spectrometer AMS-02.

The dark-matter hunter was launched in 2011 and records over 17 billion cosmic rays, particles and nuclei a year. Results from the particle physics detector are among the top five most-cited publications from International Space Station research.

The instrument was initially meant to run for only three years but has been so successful that its mission has been extended. However, three of the four cooling pumps have stopped functioning and will require multiple spacewalks to repair.

Luca will take a leading role in the spacewalks with the first intended to determine just how and where to intervene, and what tools will be needed for the process.

Listen to the ESA Explores podcast on spacewalks to learn how astronauts prepare to venture into the cold dark of space.

In the meantime, the crew are unloading the supplies, which also include fresh food and hardware for the rover-driving Analog-1 experiment, parts for ESA’s next-generation life support system as well as a software upgrade for boiling experiment Rubi and parts for the commercial external platform Bartolomeo that will be installed outside Europe’s space lab Columbus.