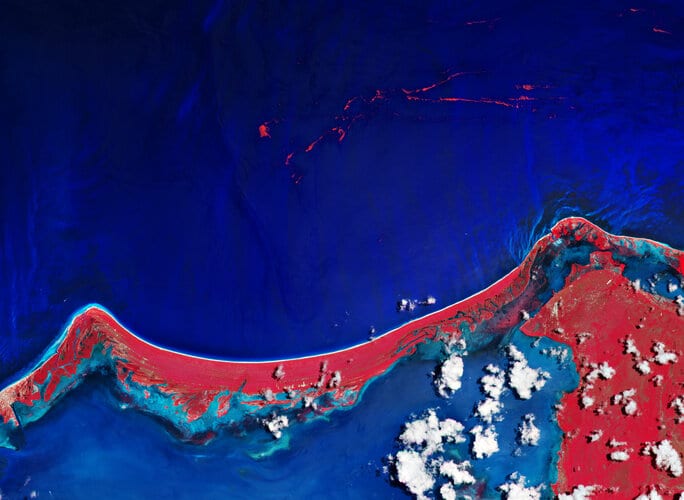 The Copernicus Sentinel-2 mission takes us over Holbox Island, off the Quintana Roo coast of Mexico. The island is separated from mainland Mexico by a shallow lagoon. This false-colour image has been processed in a way that highlights vegetation in bright red.

Holbox Island is around 40 km long and only approximately 1.5 km wide. The island is located within the Yum Balam Flora and Fauna Protection Area, established in 1994.

Encompassing more than 150 000 hectares, Yum Balam is home to several endangered species including jaguars, crocodiles and monkeys. The waters of Yum Balam are rich fishing areas and also home to whale sharks, over 400 species of bird, and over 70 different species of reptiles and amphibians.

This summer, a large quantity of the brown seaweed known as Sargassum washed up on the shores of Mexico. The brown algae is an important habitat for many species, yet when it collects along coastlines it rots and produces a pungent smell – causing havoc for  both the environment and  tourist industry.

In this image, captured on 6 July 2019, the Sargassum floating in the sea can be seen in bright red.

From 24 to 26 October, the first ever Sargassum International Conference took place in Guadeloupe where organisations and companies came together to discuss seaweed monitoring to find solutions to the massive increase being washed up in coastal communities.

Earth observation data are important in monitoring Sargassum, as the data can help local services and organisations monitor blooms at sea, and forecast when they are likely to arrive on shore, allowing local communities to act and plan accordingly.

As part of ESA’s Earth Observation Science for Society initiative , ESA joined forces with CLS-NovaBlue Environment, to monitor floating Sargassum in the Caribbean area using data from the Copernicus Sentinel-2 and Sentinel-3 missions.