You are here: Home › Cheops transfer
By Madman on 2019/December/03 in Science 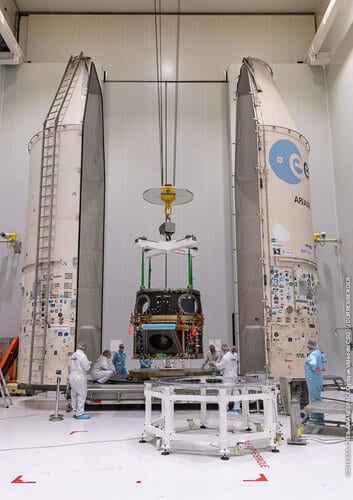 ESA’s Characterising Exoplanet Satellite, Cheops, encapsulated under the ASAP-S adapter of the Soyuz launcher, after having been moved to the platform of the transport module on 29 November. The two shells of the module were later closed and sealed before transport  to the final integration building at Europe’s Spaceport in Kourou, French Guiana.

Cheops is ESA’s first mission dedicated to the study of extrasolar planets, or exoplanets. It will observe bright stars that are already known to host planets, measuring minuscule brightness changes due to the planet’s transit across the star’s disc.