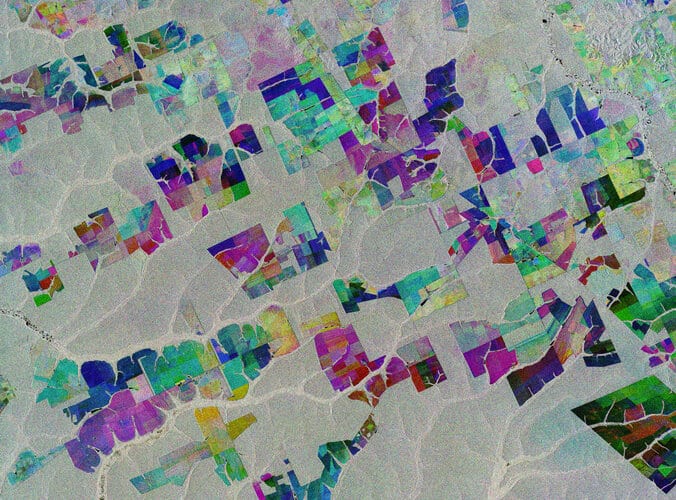 The Copernicus Sentinel-1 mission takes us over part of the Brazilian state of Mato Grosso deep in the Amazon interior.

Unlike images from satellites carrying optical or ‘camera-like’ instruments, images acquired  with imaging radar are interpreted by studying the intensity of the backscatter radar signal, which is related to the roughness of the ground.

Ironically, Mato Grosso means ‘great woods’, but, as these coloured rectangular shapes portray, much of the tropical forest has been cut down and given over to farming. While this image only shows a small area, Mato Grosso is one of Brazil’s top cattle-producing and crop-producing states, with the main crops including corn, soya and wheat.

However, although the state has one of the highest historical rates of deforestation in Amazonian Brazil, deforestation is slowing and Mato Grosso is now said to be a global leader in climate-change solutions.

As an advanced radar mission, Copernicus Sentinel-1 can image the surface of Earth through cloud and rain and regardless of whether it is day or night. This makes it ideal for monitoring areas that tend to be covered by cloud such as rainforests.