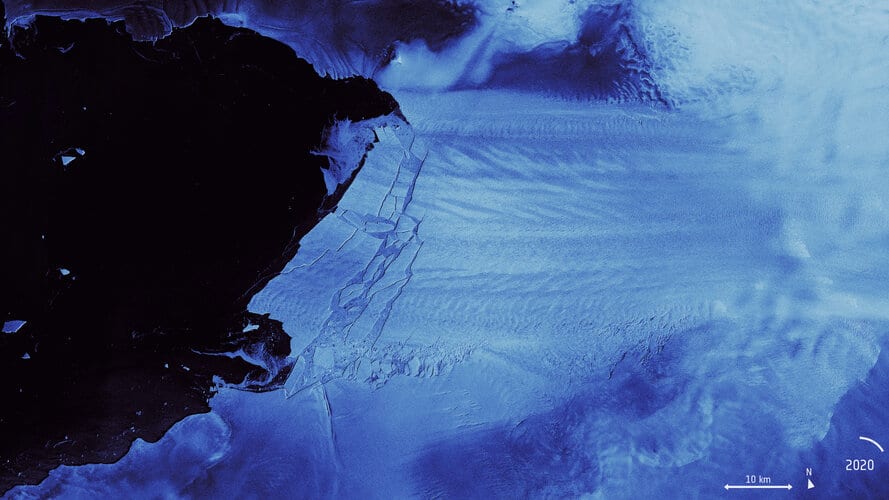 As anticipated, Pine Island Glacier, known as PIG for short, in Antarctica has just spawned a huge iceberg. At over 300 sq km, about the size of Malta, this huge berg very quickly broke into many ‘piglet’ pieces the largest of which is dubbed B-49. Thanks to images from the Copernicus Sentinel satellite missions, two large rifts in the glacier were spotted last year and scientists have been keeping a close eye on how quickly these cracks were growing. This animation uses 57 radar images captured by the Copernicus Sentinel-1 mission between February 2019 and February 2020 (the last frame is from 10 February 2020) and shows just how quickly the emerging cracks grew and led to this calving event.

Pine Island Glacier, along with its neighbour Thwaites Glacier, connect the centre of the West Antarctic Ice Sheet with the ocean – together discharging significant quantities of ice into the ocean. These two glaciers have been losing ice over the last 25 years. Owing to their extremely remote location, satellites play a critical role in measuring and monitoring Antarctic glaciology – revealing the timing and pace of glacial retreat in Antarctica. Since the early 1990s, the Pine Island Glacier’s ice velocity has increased dramatically to values which exceed 10 m a day. Its floating ice front, which has an average thickness of approximately 500 metres, has experienced a series of calving events over the past 30 years, some of which have abruptly changed the shape and position of the ice front.

Mark Drinkwater, senior scientist and cryosphere specialist remarked, “The Copernicus twin Sentinel-1 all-weather satellites have established a porthole through which the public can watch events like this unfold in remote regions around the world. What is unsettling is that the daily data stream reveals the dramatic pace at which climate is redefining the face of Antarctica.”