You are here: Home › HTV8 media briefing at Tanegashima Space Center
By Madman on 2019/July/18 in News 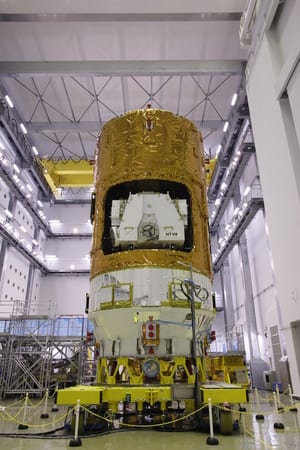 On July 19th, the H-II Transfer Vehicle (HTV8) “KOUNOTORI8” was unveiled to media at JAXA’s Tanegashima Space Center (TNSC) along with the briefing of its upcoming mission. Many journalists gathered to take the opportunity to see the flight vehicle before launch with their eyes.

In the briefing of HTV8 “KOUNOTORI8” mission, explanations were given in the following: the mission overview, major cargo to the ISS, the current preparation status for launch, also technology new demonstrations for future missions.

HTV8 “KOUNOTORI8” will be launched from Tanegashima Space Center (TNSC) after the final preparation phase for launch through the propellant loading, installation in the rocket fairing and integration with the H-IIB8 rocket.