Vast areas of the Martian night sky pulse in ultraviolet light, according to images from NASA’s MAVEN spacecraft. The results are being used to illuminate complex circulation patterns in the Martian atmosphere. To source 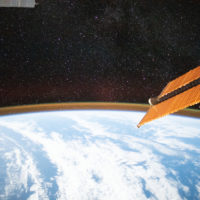 This long-exposure photograph captures a starry sky above the Earth’s atmospheric glow. To source 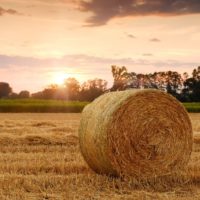 Millions of people around the world face hunger every day, and unfortunately, the COVID-19 pandemic is expected to make the issue of food security even worse. Satellites are helping to alleviate the situation by providing crucial information to monitor crop growth and harvesting from space. To source 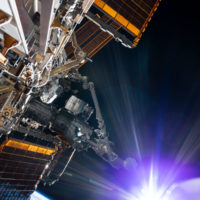 European science progressed at a slower pace on the International Space Station in the past month. As a series of spacewalks to power up the space habitat came to an end and two of its passengers left for home Earth, intriguing bubbles puzzled researchers and left them wanting to know more. To source

NASA’s Curiosity Mars Rover touched down eight years ago, on Aug. 5, 2012, and will soon be joined by a second rover, Perseverance. To source

Satellite images have revealed that there are nearly 20% more emperor penguin colonies in Antarctica than previously thought. Scientists, at the British Antarctic Survey, have used satellite data from the Copernicus Sentinel-2 mission to track penguin guano, or penguin poo, to monitor the presence of thousands of penguins. To source

Lasers on Earth are used to measure the position of space debris high above, providing crucial information on how to avoid in-space collisions. Until now, this technique has suffered from a fatal flaw. To source

A new set of images captured this spring by the Colour and Stereo Surface Imaging System (CaSSIS) on the ESA-Roscosmos ExoMars Trace Gas Orbiter shows a series of interesting geological features on the surface of Mars, captured just as the planet passed its spring equinox. To source

For decades, astronomers have known about irregular outbursts from the double star system V745 Sco, which is located about 25,000 light years from Earth. To source

Image: A laser shoots into the sky to study the Antarctic atmosphere at Concordia research station To source

Robert Behnken and Douglas Hurley are aboard the SpaceX Crew Dragon Endeavour spacecraft as it is lifted onto the SpaceX GO Navigator recovery ship shortly after landing. To source

Ice plays a critical role in keeping Earth’s climate cool, but our rapidly warming world is taking its toll and ice is in general decline. For more than 10 years, ESA’s CryoSat has been returning critical information on how the height of our fragile ice fields is changing. Nevertheless, to gain even better insight, ESA […]

Video: 00:06:21 Satellite navigation is a big part of our daily lives. How do our phones and cars know where to go? Nicola de Quattro, head of engineering and innovation at Vitrociset Belgium, explains how sat nav works along with its present and future applications in this episode of Meet The Experts. Find more episodes in […]